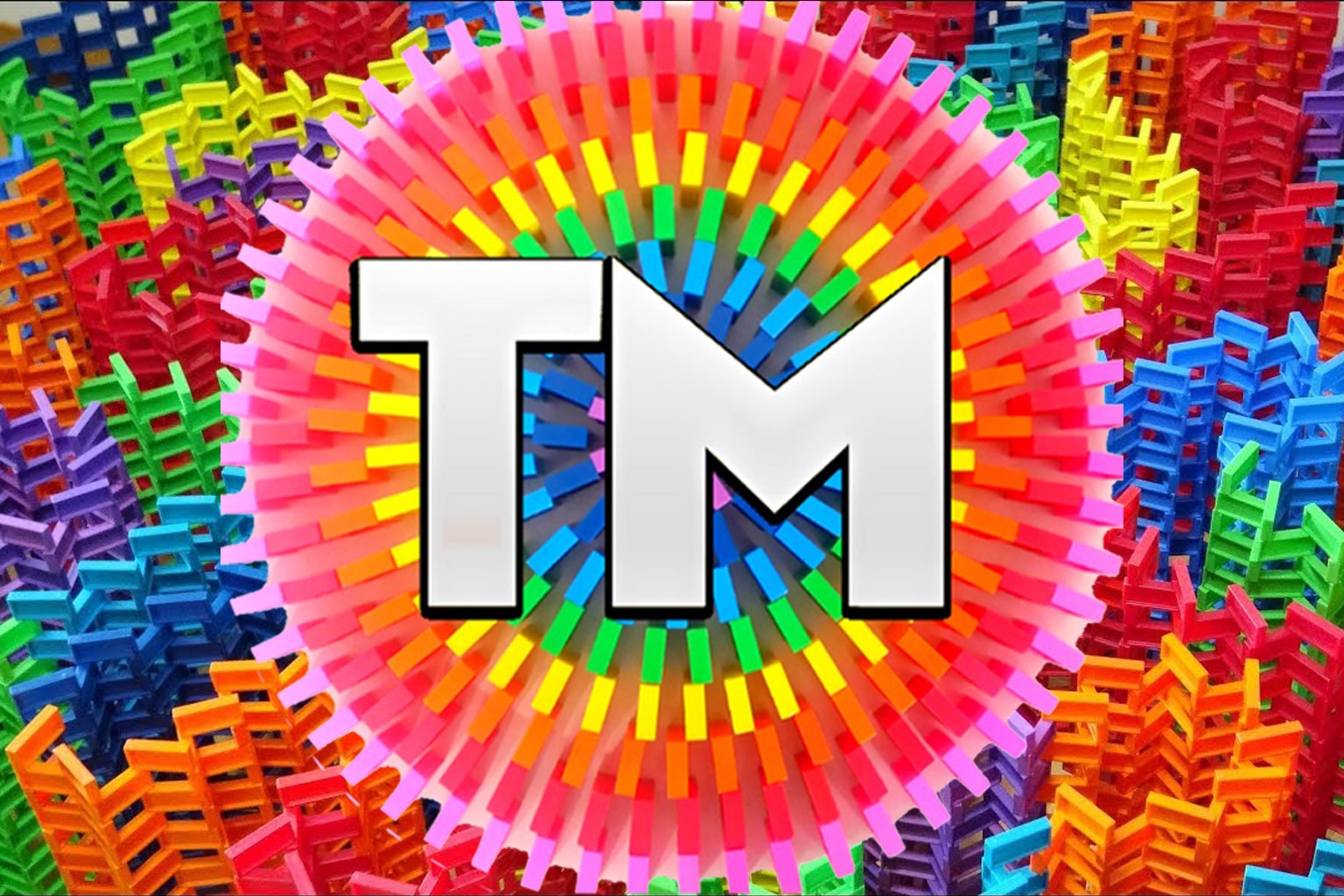 If you’ve ever watched oddly satisfying videos on YouTube, you’ve probably ran into some domino videos, and we’re not just talking about any dominoes – but tens of thousands of dominoes organized in delicate constructions. In recent years, domino art has become a major trend on YouTube and that’s no wonder; there’s something extremely satisfying about watching colorful dominoes getting knocked down in the perfect order. Today we have the pleasure of interviewing one of the biggest domino artists on YouTube, Taikamuna – English for “Magic Egg”– from Finland.

Over the 8 years that Taikamuna has been on YouTube, he has gained massive popularity, with some of his videos reaching over 40 million views. As with many creators, his career started as a hobby.

“When I was a kid, I often hung out with a friend of mine who wanted to show me some domino blocks, which he had a small box of. We built all kinds of buildings from them and often watched YouTube for instructions on how to make different kinds of constructions and chain reactions. My number one favorite was FlippyCat, a Canadian YouTuber who still makes videos.”

“I wanted to buy some dominoes for myself but they didn’t sell them in any of the toy shops at the time. However, I managed to find them online, bought about 2000 pieces and decided to start uploading my own domino videos on YouTube. I uploaded videos whenever I felt like it, and for many years it was just a hobby. Eventually I got bored of making videos. At the time, I didn’t have a lot of viewers – only about 700 subscribers – and my most popular video had about 50k views. “

A couple of years forward Taikamuna got enthusiastic about making videos again, but his subscriber count stayed the same. That is, until he made a "FIDGET SPINNERS VS DOMINOES" video which, to his surprise, suddenly went viral.

“The video got over a million views in one week, I couldn’t believe it was happening. I know that only a small part of YouTube videos get over a million views so I felt very lucky. I got even more views and my other videos also started getting more views. I continued making videos - putting more effort into them, and my subscriber count quickly started increasing. I’ve been making YouTube videos for 8 years, but for most of that time it has just been a hobby.”

Watching the domino videos, one can only admire how much patience goes into building the intricate works of art. What is the most challenging part about making the videos?

“The most challenging is not the building itself, but coming up with new ideas and sticking with a schedule. “

And what about the most fun part?

“The most fun part is when I tap the publish button and go read comments from people who already watched the video. Almost all of the comments I get are positive, which gives me the motivation to make new videos. Sometimes I also get good ideas for what kind of videos to make in the future from them.”

Almost all the videos are shot in separate clips that are combined when editing the videos. Taikamuna knows that many domino artists use this technique for several different reasons.

“First of all, you can make longer vieos in less space. You don’t need more dominoes than what’s showing in the frame, which means you can reuse the domino blocks in the same video. Also, building a big domino construction is always more risky than building several smaller ones – if all the chain reactions were shot in one clip, one mistake could ruin the whole video.“

That brings us to mistakes. Do you have to rebuild the dominoes often?

“Very rarely, actually. I already have so much experience from building dominoes, that mistakes don’t happen very often. Every time I make videos where I combine lots of shorter clips or make complicated tricks, there are more failed attempts – sometimes more than there are successful ones.”

Some of the domino constructions have more than 50000 domino blocks. How long does it take to build one work of art?

“Building the dominoes takes from a few hours to a whole week. Many domino art works are ready in one or two days, depending on the size of the picture. Longer, “screen link” type of work often take a week, and building one piece of art takes 2-3 hours. “

What kind of videos are the most fun to make?

"I feel like videos that are somehow different from my normal upload routine are the most fun to make. For example, I made a special video when I reached 100000 subscribers, and also the whole "DOMINOES EVERYWHERE" series, which in the end, had nothing to do with dominoes, is a fun one. I also have another channel called Mätämuna, where I’ve uploaded a few videos."

Views on the future

You and other domino artists have become very popular on YouTube. What do you think is so attractive about domino videos?

“I think people enjoy domino videos because they’re so colorful and oddly satisfying to watch. Domino building is quite rare as a form of art, so I think some people like to watch it because it’s so different compared to any other art forms. “

Taikamuna started his YouTube channel 8 years ago. In this time, what started as a hobby has evolved into work, and a lot has changed.

“Sometimes I feel like making videos is more like work than a hobby. In the beginning I used to take long breaks and upload videos when I felt like it. Now I try to upload regularly, even if I sometimes don’t feel like doing it. Earlier, I put less effort in my videos and sometimes I didn’t upload anything. Now taking a longer break feels stressful, because it means getting less subscribers and less views. In those moments I try to remember that it’s okay to take a break from a normal job as well, and there’s no harm in it. “

The domino artist sees a promising future as a YouTuber, but that doesn’t come without hard work.

“I don’t think my subscribers will disappear as long as I put effort into my videos. The biggest challenge is how to keep making videos for several years. I haven’t grown tired of making videos yet, but that might happen in the future. I don’t know what I’m going to do after that.”

Even though consistent uploading takes a lot of time and effort, Taikamuna finds a lot of positive in being a YouTuber.

“The most positive thing about being a YouTuber is the freedom of working or taking days off whenever I feel like it, and not having to go to a workplace because I work from home. Another good thing is the money–some of my videos are so popular that I still get paid from them even though I uploaded them over a year ago. Often I don’t have to do anything at all, and I still get paid. On the other hand, sometimes I put a lot of work into some video, and end up getting paid little."

On the other side of the screen

Taikamuna tells he’s been watching many different YouTube channels for years and his interests towards different things have changed over time.

“My favorite videos besides domino videos are memes, science related videos, sketches, animations, art and DIY projects. I don’t especially like gaming videos or vlogs. In general I’ve been watching videos less and less, and mainly use YouTube for listening to music.”

Of course now we have to ask, what’s your all-time-favorite video?

“Over the years I’ve watched so many videos, I can’t possibly remember which one was the best. However, one of the best ones is a video made by Sprice Machines in collaboration with several artists called "The Lemonade Machine". The video is a 9-minute-long chain reaction that is filled with interesting parts. What makes it special is the fact that there are no cuts, so it has had to be made again and again every time there’s a mistake in the chain. I would never have the patience for that. “

There are many domino artists who are more talented than me, but the next topic will have to be something different. There’s one “YouTuber” you could interview next, Justin Y. He never uploaded a single video, but has gained major popularity from commenting on almost every single YouTube video. Nobody knows anything about him, but he’s everywhere. It would be interesting if you could interview him.