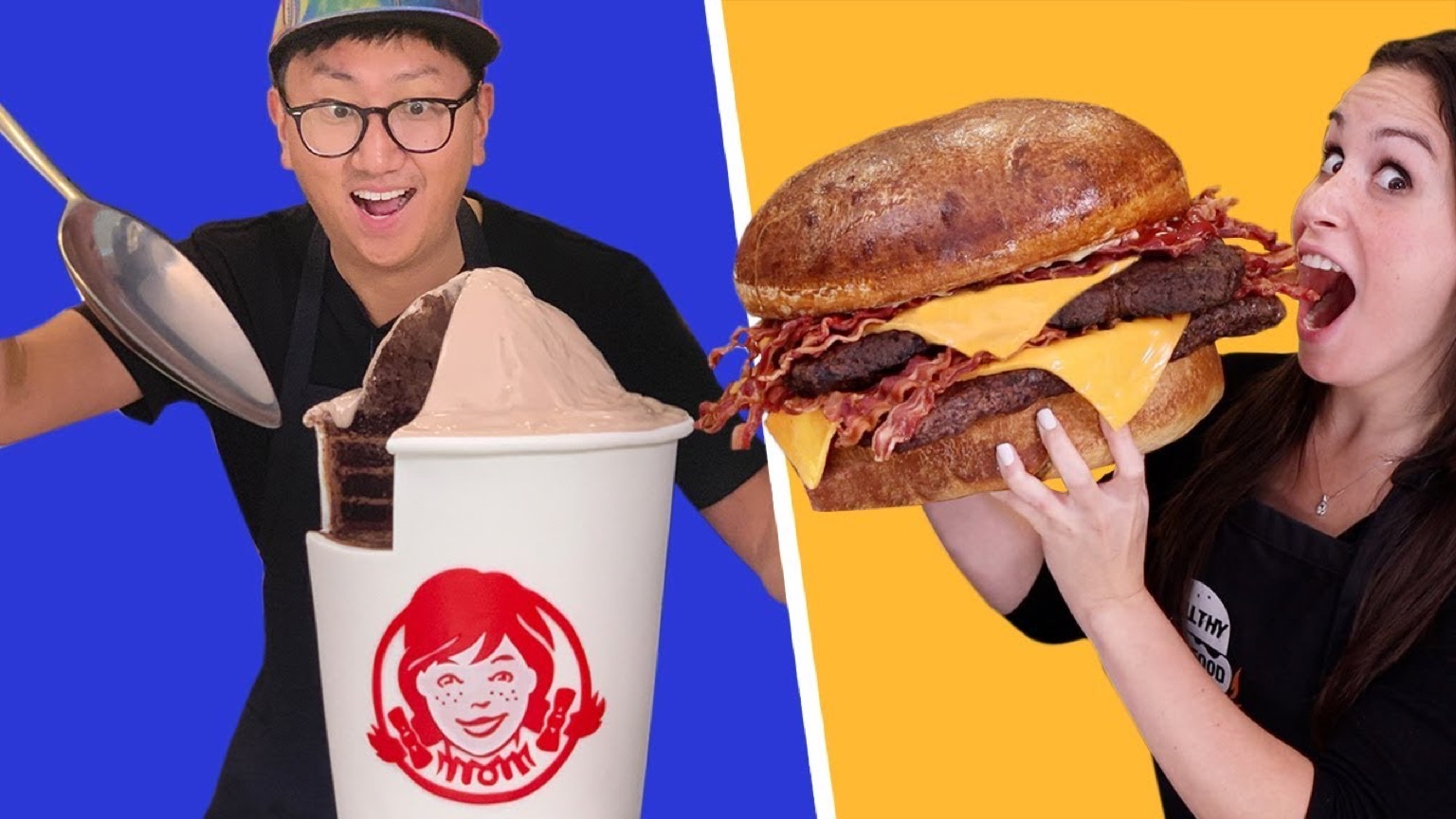 If you’ve ever watched crazy cooking challenges on YouTube, you’ve probably ran into Hellthy Junkfood, a cooking channel created by Julia “Goolia” Yarinsky and JP Lambiase. Hellthy Junkfood is far from your usual cooking channel, it combines crazy challenges like “Only eating chicken nuggets for 24 hours”, restaurant and recipe remakes, cooking GIANT versions of your favorite fast foods and epic cooking battles. In their own words, it’s a “comedy cooking satire for the 21st Century”. The concept clearly works, because the channel has gained over 2.25M subscribers and 470M + video views on YouTube so far. We had the chance to chat with Julia and JP and find out a bit more about their story.

When Julia and JP first started dating, JP was eating a lot of fast food as part of his bachelor lifestyle. When Julia saw this, she suggested that the couple start making healthier versions of their favorite fast foods at home.

“I was like cool, let’s film it, and let’s name our channel ‘Healthy Junkfood!,’” JP says.

In the beginning, the videos were mostly about cutting calories from fast foods by remaking the recipes at home, but the concept of the channel has evolved quite a bit since then. Today, with its over-the-top giant dishes and crazy fast food challenges, the channel is far from being healthy—on the contrary.

“We wanted to create a healthy junk food channel, but the name already existed on YouTube, so JP then created the word ‘Hellthy Junkfood’, which ended up being the greatest out for us from actually being healthy. Even though personally I’m an advocate for good health, I don’t really condone that or share that on the channel anymore because it’s not healthy at all—but initially, it was supposed to be,” Julia explains.

For the first three years, the couple didn’t really take themselves seriously and treated YouTube like a hobby, but after they passed 100000 subscribers, the channel started growing very quickly.

“I feel like that’s the threshold where you kind of snowball and it just grows really really fast, but only if you have a lot of old videos that are really good. When we went viral we already had 300 videos in our library and everyone just went on a binge, so it was really cool to have people watch all our videos,” JP says.

After doing YouTube as a side project for a couple of years, JP and Julia both decided to quit their day jobs—JP as a mechanical electrical engineer and Julia as a radio sales executive—to become full-time YouTubers. They moved from upstate New York to Florida, and started building a real business out of their channel. Even though some of the backend work like editing the videos or managing social media sometimes can feel monotonous, the couple truly enjoys their work.

“It’s always just as fun as it looks. If we’re making pancake art, or traveling to Singapore or Thailand and experiencing something for the first time, it always is that fun,” Julia says.

JP agrees that producing the content is the most fun part of their work.

“I would say like generally just producing is fun and then the backend is kind of like having a blank canvas where you take your production and you kind of just paint a picture into a video that people will watch, so it’s a process,” he says.

Out of all the hundreds of videos they’ve produced together throughout the years, JP and Julia both have some favorites.

“For me it’s The Last Big Mac. In 2015 we storyboarded a very satire-like, action flick-Gone Girl-style thriller. It was really fun to make and I’m almost thinking of re-uploading it,” JP says.

“I personally like our competitive recipe videos, like the Oreo Taco Competition, stuff like that. I like doing hands-on stuff, but luckily in the world of food there’s so much, there’s experiencing things, building things and of course, cooking!”

Creating the dishes usually takes a lot of creativity and research before ending up in a YouTube video. As an example, once they made edible water bubbles, which was a science project of its own and took many attempts until it succeeded. And sometimes the recipes just fail altogether.

“I tried to make stretchy ice cream, I recorded it and I got all these special ingredients, like this stem of an orchid created into a powder, which you can only get from Istanbul or somewhere in Turkey. I got it specially ordered, and it was expensive, then I mixed it into my ice cream and it was supposed to make it stretchy. Well, it never became stretchy so we never edited it into a YouTube video,” Julia says.

Finding the right recipe isn’t always so important in terms of the success of the video though, she notes.

”Sometimes we compete and then our audience can just rank who does better, sometimes those videos do better than others based on one of us really doing a good job. JP is kind of like the funny oddball character. Like there’s this hot dog video that he made, where he put like thirty hot dogs inside of this roll and he cut it in two and it looked like some kind of deceased creature, and I would say…if you’re hungry, don’t watch that. Watch it for entertainment!”

YouTube has been a big part of the couple’s lives for a long time, so they have some pro tips for people who want to start their own channels. JP’s advice is to think deep about what makes you happy, and then see if you can apply that to video or find a way to monetize it.

“Anything you’re passionate about and love in life, if you find a way to monetize it then what you’re going to be doing for your job you’re going to love, and then you’ll be happy and then you won’t want to stop doing it, you’ll have patience and you’ll keep going. But that’s the secret sauce to life, not just YouTube!”

Julia points out that you also first need to figure out if you even like making videos.

“Like iPhone has a great camera, just get a little tripod and you can just record yourself with that. Then take that footage onto an editing software and just edit - upload! Just continue to do it. Do ten videos within three months time, post like once a week, and see if you like it. But definitely don’t rely on it because there’s nothing out there other than the stars that will align at some point for you if you are dedicated and love it. Having ‘talent’ is important too, but it’s more like if you have a great personality and you’re genuine, you have a story to tell—you definitely can get a lot of followers,” she explains.

In their free time, Julia and JP both watch a lot of YouTube.

“My personal favorites are some of the channels that we’ve met along the way and that are like our ‘YouTube friends’, but I also do like to just follow the trending list and see what’s happening. I love ThreadBanger, Simply Nailogical, Safiya Nygaard…I like watching funny stuff on the internet,” Julia says.

“I like the news and stuff, I like Philip DeFranco, I like everything that Mr Beast is doing, and obviously I like #1 Pewdiepie for life, he just represents YouTube. I watch a lot of movie reviews because I’m a big movie buff. I’ve been watching beauty drama too, because it’s just all on my news feed,” JP says.

“I don’t like the condoning of people getting views for doing something that’s dangerous or puts people in harm’s way. I’m just not an advocate for that, because there’s been fatalities from people doing stupid stunts and I just don’t think it’s worth the views. People that do that won’t be successful for the right reasons. And they might think it’s OK because you’re getting all this attention, especially when you’re young.”