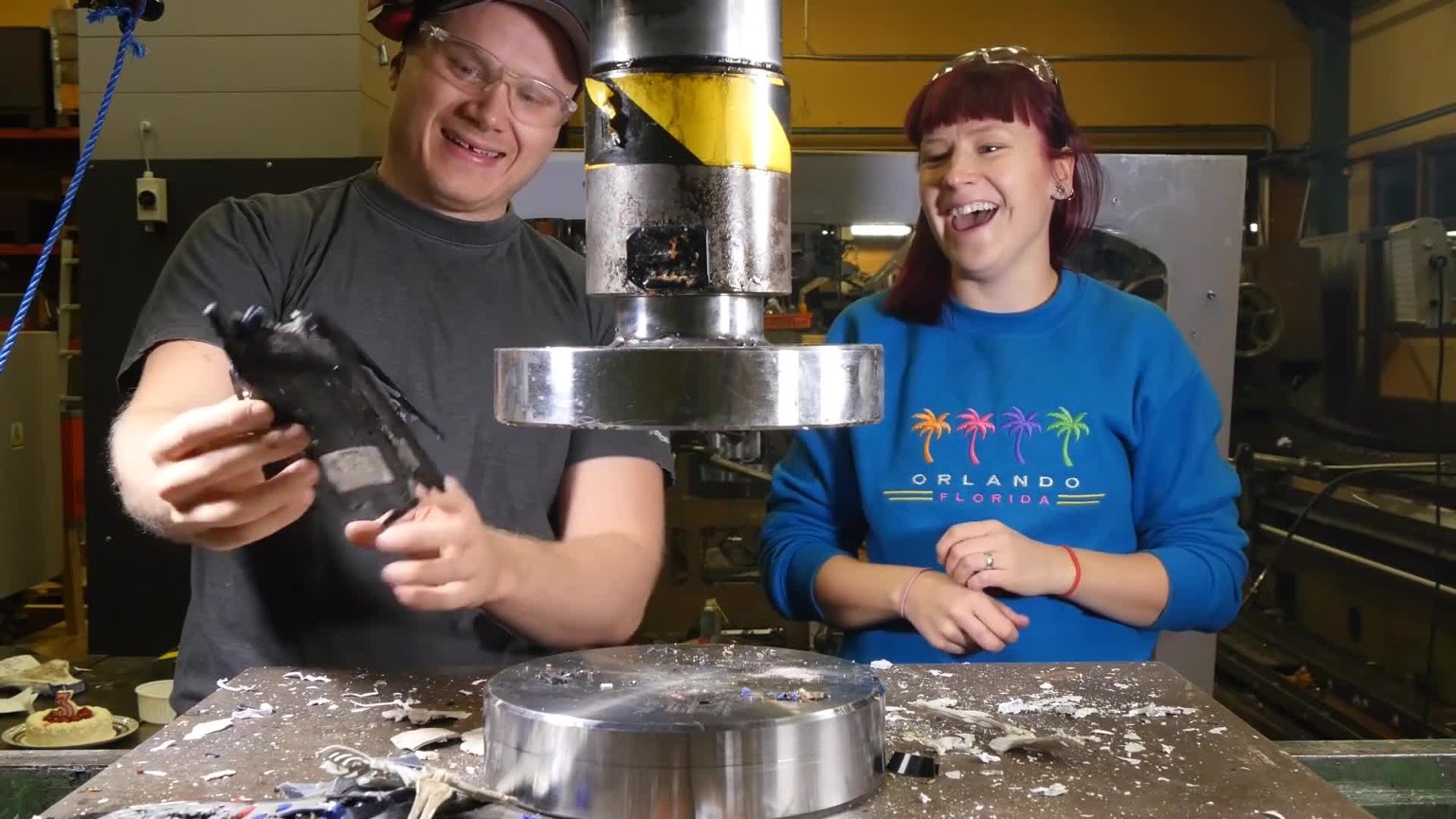 Have you ever watched a YouTube video of a bowling ball or a diamond getting crushed under a hydraulic press? If yes, it’s very likely it was made by Finnish entrepreneur couple Lauri and Anni Vuohensilta, the creators of the Hydraulic Press Channel and founders of the HPC Entertainment Company. Anni and Lauri live a seemingly ordinary life in the countryside outside of Tampere, but they are in fact, super popular YouTube celebrities. They are most known for their hydraulic press videos, but also make other crazy science experiment videos like combining red hot steel with dry ice or mixing smoke grenades with soap water on their other YouTube channel Beyond the Press. Today we get to hear a bit more about what happens behind the scenes of their channels.

In 2015 Lauri was watching a lot of YouTube and saw a carsandwater video called “red hot nickel ball”. At the time he was working at his family’s workshop and thought that he could easily make the same type of videos. He told the idea to Anni, who also got excited.

“We were thinking about all the machines we had at the workshop and came to the conclusion that the press is the easiest – you can put anything in there and just pull the switch and something always happens. We checked immediately and saw that there’s nothing like that on YouTube,” Lauri says.

Anni tells that the couple often has plans and projects together, and the YouTube channel was just one among others: “We often get excited about things and if we get excited about something, we start doing it full on. And then we make great big plans but most of them never come true, at least before they didn’t.”

In the first five months the videos got very little views. Anni and Lauri didn’t promote their channel anywhere, they didn’t even tell their friends they were making videos. Then all of a sudden, one of their videos about folding an A4 paper seven times, went viral on Reddit. “In the first week it got 2 million views. At that point we thought ‘we have to start making more of these’. During a couple of days when we realized that every video we post gets millions of views, we felt like we had to keep making videos. Of course we couldn’t know how long the popularity would last, but we felt like we had to keep making videos,” Lauri says.

Eventually the couple decided to leave their day jobs – Lauri at his family’s workshop and Anni at IKEA – to become full-time YouTubers. Now, their YouTube channel has over 2 million subscribers. The White House even sent them a TV box to crush during the Obama administration, in an attempt to campaign against the cable company monopoly. Anni and Lauri attribute their channel’s popularity to a combination of different things.

“With this topic it’s very easy to come up with interesting click-baity titles for the videos: what happens if you do this or that – and as videos, they’re entertaining. Our personality and style also go well with them. It’s easy to click and easy to get into that YouTube loop of watching more and more. They also fit really well on the platform,” says Lauri.

Driving a car with saw blades on a frozen lake, crushing real diamonds with the hydraulic press… how does the couple come up with all the crazy ideas for their videos?

“We get a lot of suggestions from our viewers, and those are like challenges to us. If we make some stupid thing it’s kind of like “yeah, but can you make this even stupider?” Quite a big part of the ideas I just come up with. Let’s say, we think about a topic, like ice on a lake, and then we think about all the tools and machines we could use for the video. We also watch quite a lot of other channels. We might see some video like cutting styrox with a pressure washer– and if we think it’s a fun idea, we get a pressure washer the size of a truck and cut half a meter thick ice with it,” Lauri says.

Viewers not only suggest ideas for videos, but they also send stuff for Anni and Lauri to crush. The weirdest item anyone has ever wanted them to crush is a tooth. Anni told them not to send it, so their wish didn’t come true.

“I was like, I don’t want to crush anyone’s tooth!,” she laughs.

Anni points out that the Finnish countryside gives the perfect surroundings for making these types of videos:

“We have really good resources: we have the workshop here and in the countryside you can do pretty much anything. In the United States people make these kinds of videos in their backyards - here we have a lot more space.”

The couple has also learned how to collaborate with companies to make better videos.

“We’re pretty good at selling stuff. If we need something really expensive for the videos, we can often make deals and get them. I also helps that we’re in Finland, it’s a bit easier here compared to other European countries and the United States. Especially in the United States it’s harder to get big companies to lend expensive machines for these kind of things. In Finland it’s more relaxed and companies want to do all kinds of fun things,” Lauri says.

Speaking of fun, what is the most fun thing about making the videos?

“I think it’s the most rewarding when you come up with a great idea and then you go and execute it. Like yesterday we made a video where we tested how much pressure hardened glass beads can take. We started making the video and it turned out the beads were super hard, a lot harder than we expected. So then we felt really good: we have an interesting title and an even more interesting result, and people are really going to like this. So those kinds of videos are maybe the most fun,” says Lauri.

Working with heavy machinery and explosives can be dangerous, but Anni and Lauri are well prepared for all the risks.

“We always think all the big and dangerous stuff through really well in advance and make sure everything is done in a safe way,” Anni says. “Actually, the biggest risks lie in doing more ordinary stuff, in things that we do repeatedly every day – like using the press. If you have a little careless error with that, like tripping on an electric cord or if you’re too close to the press and something flies in your eye or something, that can be dangerous. But of course we always have the safety glasses on, so that helps a lot.”

Lauri tells the couple hasn’t had any dangerous situations so far:

“We don’t really have any dangerous situations, we’re pretty careful with these things. Like if you do something risky once, you’ll probably survive it – but if you do it three times every week, at some point you’re going to get hurt. So you have to make sure to do everything really safely.”

And what if safety – or money – wasn’t a concern, what would be a dream thing to crush?

“Well, people always say that if you crush two big plutonium balls you would get a nuclear explosion,“ adds Lauri.

Anni and Lauri have had their YouTube channel since 2015 and in that time, they have seen some changes in the industry.

“In the beginning there was a period of half a year, or 3 months, when this was a trending topic, so at the time it was really easy to get views for practically anything in this space. But then on the other hand, there was more competition also, so you had more stress about executing the best ideas before anyone else. These days almost nobody else is doing this, so you can just make one hydraulic press video per week without having to worry about somebody making a similar video first.” Lauri says.

Anni points out that over the years YouTube has tightened their monetization rules.

“YouTube rewards longer videos, which affects it, too. If we have an ad in the middle of the video, it can’t be a 3 minute video with a one minute ad. So we need to make longer videos. Before we would make three 3-minute videos per week, but now we make one 10-minute video which has the same amount of content. So you have to pile up more content into one video,” Lauri adds.

All in all, the couple has found their passion on YouTube and wouldn’t change their work for anything.

“Most of the time this work doesn’t feel like work, it’s so much fun. We just had a new employee start on Monday, and at the end of the week I asked him how he was feeling about the job. He said that it was a better week than the 1995 hockey championship week, when Finland won gold. So he was really excited,” Anni laughs.

“At the same time this is like a hobby, and then sometimes I’m reading YouTube comments at 10pm on a Sunday night and wondering if I’m working or if this is free time.”

Anni and Lauri have uploaded over 240 videos on the Hydraulic Press Channel so far, some of which have become their personal favorites. Lauri is excited about the hardened glass drop video they’re currently working on.

“We could only break the small glass bead, which is about the size of the tip of my finger – and that took 30 tonnes! We have another one, bigger than the size of a golf ball, that we’re planning to press it this Sunday. I know that the hardened glass drop videos always get lots of views, people like them, and nobody would ever think that you couldn’t break it, so I can’t wait to publish that one. It’s a bit of technical topic, so I doubt it will get like 20 million views, but I think it’s going to be a really good video and I was so surprised myself, so I think others will be surprised too.”

Anni remembers one video from the channel’s early days. In the video, they pressed a dictionary.

“It wasn’t the best quality video or the biggest explosion, but at that time we were still learning so we had these self-built covers for the press and we had cameras all over the place. When the dictionary exploded, the covers flew off and knocked our cameras down. Inside the press I had my cell phone shooting a slow-motion video, which turned out to be the only one we could use. In the finished video we had a text in the beginning: “our main camera didn’t survive this explosion, this is shot with just a phone”. That itself is a promise of an adventure, and then there’s massive chaos when the book explodes. It was the first time we blew up a book. What made it more funny was that at the time, my Finnish accent was super strong, and in the beginning of the video I say that I’m going to blow up this English-Finnish dictionary, because I don’t need it anymore. It’s such a funny and surprising video,” Lauri says.

Without any hesitation, Lauri has a YouTube channel in mind:

“Isaac Arthur is amazing, they make great tech and space related videos. I don’t understand how they are able to make a 30-40 minute, really well produced video every week.”