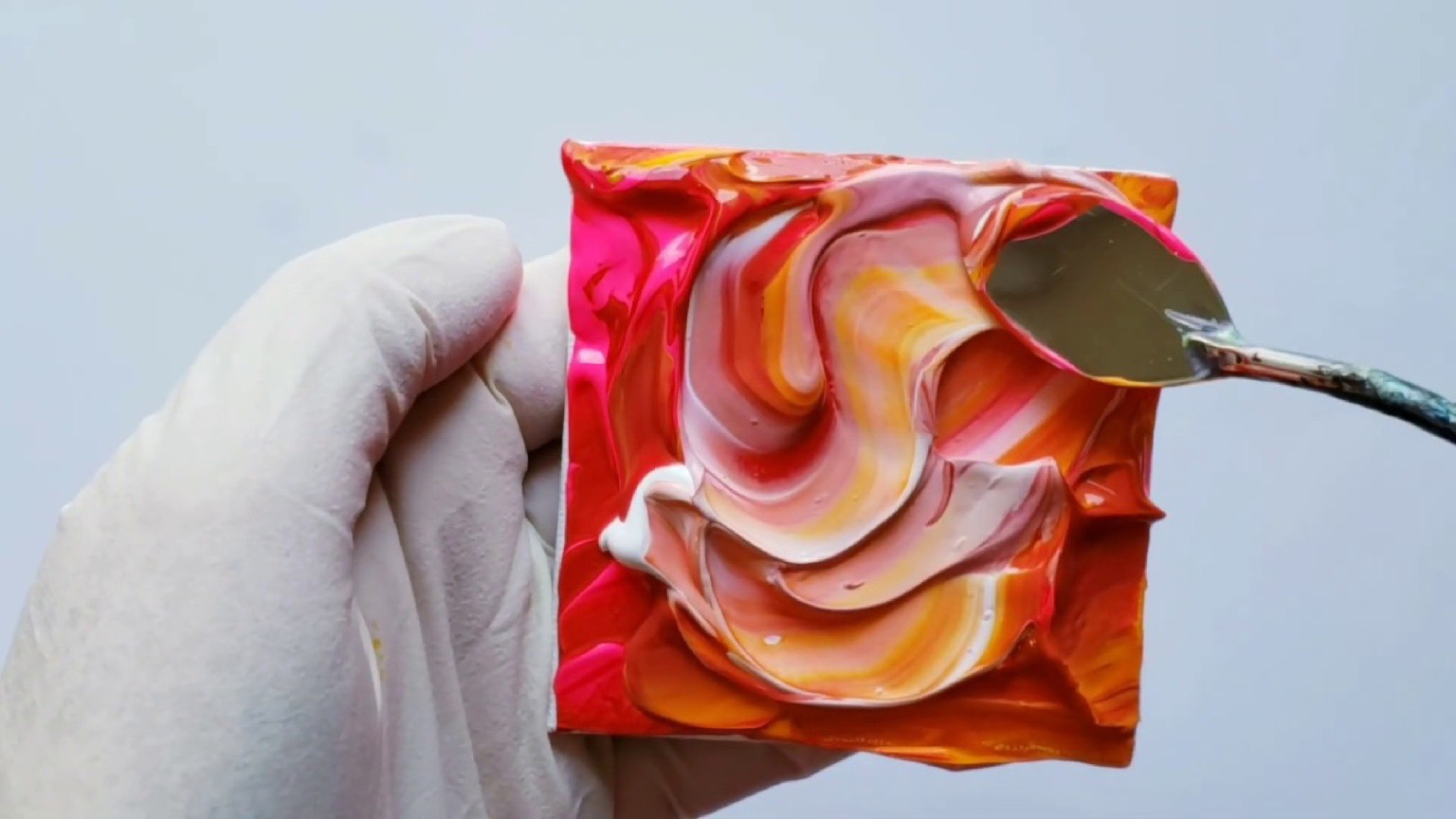 Today we have the pleasure of featuring the artist behind the insanely popular paint mixing videos on YouTube and Instagram, Annette Labedzki. Her YouTube channel Labedzki-art is one of the most popular paint mixing channels on the platform, with over 795000 subscribers and hundreds of millions of video views.

From passion to popularity

Annette is a Canadian professional artist, specializing in abstract figurative paintings. She started her YouTube channel already in 2009, but initially only made tutorials. A few years ago, she saw some paint mixing videos on Instagram and decided to try out making videos herself – after all, she was mixing paints in her studio every day anyways. Almost instantly after starting out, her videos exploded in popularity.

“Making paint mixing videos was way more fun than doing the tutorials, so I started putting them on YouTube and they really took off. I think what I really learned is that you should never give up. Those tutorials…it really wasn’t my cup of tea and so I just kind of gave up, or almost – I didn’t close the channel or anything. I stopped making videos for three years and then I started again, and everything just blew up and I thought, ‘wow, never give up because you never know!’ That for me, was quite a learning experience.”

And what did it feel like, suddenly becoming so popular?

“Shock!”, Anette laughs. “I had a really hard time dealing with it, I had a lot of anxiety and I didn’t understand it. Now finally, it’s been about three years of things going really well and I’m much calmer, I’m adjusting. You don’t just adjust the minute it starts happening, it takes time to believe it. There’s lots of love but also lots of nonsense, so it takes a lot of mental energy to figure out how to deal with the public in a professional way – never engage in the negativity, even if you feel hurt and you want to reply. I’ve trained myself to be really professional and not take any negativity too seriously.”

One might think mixing paints on camera is simple, but that is not the case. Annette has worked as a professional artist for 30 years, so she truly is the expert in combining colors in a way that they stay beautiful and vibrant even after mixing. The color is also the main reason Annette thinks people watch her videos.

“It’s my gift as an artist, and by gift I mean something that comes easy to me, whereas everything else I’ve done, like learning to draw human anatomy or composing the canvas, everything has been absolute torture, video editing – torture. But color? It just feels like a gift because no matter what I choose, it turns out beautifully.”

“Yes. There’s no politics, no hate or murder, just the adventure of the changing of color. It does something for the brain, for the eyeballs and the brain.”

And what about the colors, are there any specific ones that people really love?

“I’ve noticed that everything with the frozen paint seems to be popular. I like those frozen objects a lot, but sometimes I miss the luxury of just paint coming out of the tube so I switch back and forth. And I have to remember that I’m an artist, so I’m not just making a video because I think it will be popular. So there’s a lot of psychology involved, training yourself to be professional and to continue being an artist instead of just following what the public might like. I guess it’s a balance, like anything in life.”

Annette is extremely productive: so far she’s uploaded over 1500 videos and she uploads several new ones every week. Her secret to staying productive is absorbing inspiration from all around.

“Living in Vancouver near the sea definitely gives me tremendous inspiration. The freedom that the ocean offers, the sense of space and freedom really helps my art. And then of course I get inspiration from people, you know if, somebody is very pretty and they have a nice color blouse, I might make a video with those colors. I get inspiration from anywhere, I just think my mind has to be open. I have to be open to new ideas and let stuff come in.”

Recently Annette has been experimenting with combining her love for gourmet food with paint. An example of the result in a 1-minute-video of a colorful oreo-shaped frozen paint sculpture being smashed gently with a palette knife. The work that goes into a video like this takes a lot more than 1 minute, though.

“Especially if it’s a new food item, I’d have to either make the clay sculpture or buy the food and make a mold using a special method I’ve developed. In the beginning I thought I could just buy frozen foods and make molds from them, but that didn’t work, because the temperature of frozen food ruined the chemistry of the silicone paddy. Then I discovered that if I let the food dry overnight, I was able to make molds even out of cooked shrimp or dried meatballs. There are so many details I haven’t shared! So let’s say I make a food one, that’s all involved in behind the scenes and then I have to put paint in it and hope to god it actually looks good when I pop it out. Then I take the original video and because I’m crazy, I will edit it in at least 5 or 10 different ways. It’s 30 years of knowledge and experience squished into a one-minute-video.”

In each video, there is the visually satisfying aspect, but also another important sensory element: the sound. People love the sound of the palette knife going through the frozen paint, but this wasn’t always self-evident to Annette.

“I never planned that. When I heard people say they love the sounds I thought, what are they talking about? In order to become more objective, I watched my YouTube videos on TV and just listened to the sounds. That’s when I realized that it was a really cool, unusual sound.“

Having been on YouTube for the last ten years, Annette has made a huge amount of videos. Inspiration doesn’t always come easy, but there are times when everything in a video just comes together and works.

“I posted a video a few days ago though, it’s called Sexy Lemon – that was one of those where I felt like I put 2000% of energy and information and I felt really good, those are the ones. Where you cram a ton of information into one minute and somehow it all comes together. Or you just have the colors and it’s powerful. Wow, that was an adventure.”

“I didn’t watch YouTube for a long time, I was just too busy. But about 6 months ago I fell into the YouTube rabbit hole on my TV. I just had no idea that there was so much! I’m watching a video on the climbers of Mount Everest, and then suddenly I’m on a Himalayan bee farm. It’s just heaven, unbelievable! I enjoy very different videos from my career so I’m not all pumped up, I need to relax at night so that’s when I watch YouTube.”

“First person that comes to mind is an artist on Instagram and YouTube, Edgar Artis, I watch his stuff regularly. There’s a few that I’m in love with on Instagram but they have YouTube channels as well. This guy does these beautiful dress illustrations food, and flowers and I just find his work really…there’s this sensitivity that I connect with.”